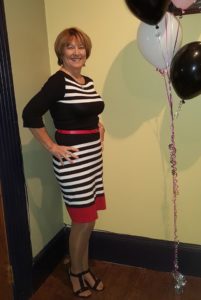 May of 2013 at my annual medical checkup my doctor pointed out that I had been adding pounds for several years and if it continued I could start having more medical issues. And my cholesterol was at a point where I should start on a drug.

June 2013 I joined the AFC gym using the weights and the aerobic classes. Christmas 2013 I had lost 42 pounds – best gift ever!

March 2015 I injured my back. Fast forward to 2017… Gained 12 pounds and determined not to gain each year again, joined boot camp with Karen and Tom guiding me through with ‘back friendly’ options.

With their support, and having fun while exercising, I have lost a few pounds but GAINED a ton of strength and determination, many new friends, and I look forward to my boot camp workout!

Click Here to Get Our 1 Page Meal Planning Success Blueprint!

Join Us and Have a Blast!